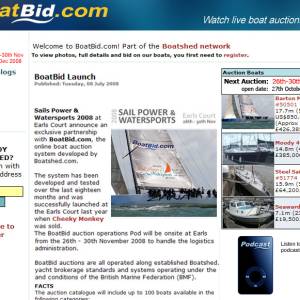 The world’s largest boat auction is being staged at the Sail, Power & Watersports Show 2008 at Earls Court and the catalogue of boats for sale is now LIVE on the BoatBid.com website. From an historic Royal Yacht through to family cruisers, 100 boats will be auctioned live at the Show starting on 26th November and running through to Sunday 30th November.

BoatBid is a timely initiative of the yacht brokerage group Boatshed and is being run to encourage more people to get afloat. Many of the boats in the auction have very affordable starting prices and also have the security of a full brokerage service behind them. There will also be a special section of the show where some of the boats in the BoatBid auction will be situated offering people the option of actually getting on board on the day of the auction.

Second hand sales are buoyant
Neil Chapman, MD of Boatshed, comments “Second hand boat sales are buoyant at the moment with many people realising that investing in a vessel is a great way of enjoying being out on the water with family and friends, keeping their investment secure in these choppy times and hopefully grabbing a bargain too. The BoatBid auction is a great introduction to buying a boat and we are hoping that people use the next three weeks to search through the catalogue and set up viewings on the boat or boats that they are interested in.”

Interested parties are being encouraged to log-on to BoatBid.com and view the selection of over 100 boats that are being put up for auction. As with the Boatshed proven system, there are up to 70 photographs of each boat, each boat has been personally visited by a trained broker and people are able to get a really good feel of each vessel before arranging a viewing.

To bid with BoatBid, participants must register on the website and pay a small fee of £4.95. This ensures that bidders are serious about their intention to buy and also means that all bids placed are accurate which ultimately helps everyone in the auction.

BoatBid Auction Pod provides central hub
During the Sail, Power & Watersports Show there will be 20 boats auctioned each day. The auctions open at 1100 GMT on the opening day and thereafter at 1000 GMT and finish at 1700 GMT. All bidders will be able to take advantage of the BoatBid Auction Pod situated at the Show where representatives from all elements of sail and power boat sales (insurance, finance, security and legal) will be available to take questions and offer advice.

Once the auction finishes at 1700GMT and provided that the reserve price has been met then the winning bidder will be asked to put down a deposit on the boat. The official brokerage service will then commence and surveys and sea-trials arranged for the winning bidder. Everyone can bid in absolute confidence because the boat is sold to them subject to survey so should there be anything shown that diminishes the value of the boat, the bidder has the opportunity to pull out of the deal (deposit returned) or negotiate a different price through the broker.

James Brooke, MD of the Sail, Power & Watersports Show 2008, added “As our show is all about introducing people to the pleasures of being out on the water and owning a boat, the BoatBid auction should be an exciting addition to the event. Affordable boating is high on our priority list this year so by providing an auction, we are offering visitors the absolute best chance of becoming boat owners in 2008 and giving everybody a bit of fun in the process.”

Although the doors of Earls Court open to the public at 1000 on November 26th, the official show opening takes place at 1100 on 26th November and thereafter visitors will also see the BoatBid auction for the first 20 boats open. An auctioneer from a world famous auction house will open the bidding and people are able to bid online, on the phone or in person at the Show. The brokers who personally viewed and photographed the boat will also be available to take questions and to ensure that everybody interested in bidding has a chance to do so.

Bids on the boats being sold each day will be displayed at the Show on screens and every evening at 1700, when the auctions close, there will be BoatBid Fizz @ Five to celebrate the sales of the day and to allow everyone a chance to see what has been going on. Everyone at the Show is welcome to come along and raise a glass (or two) with the BoatBid team.