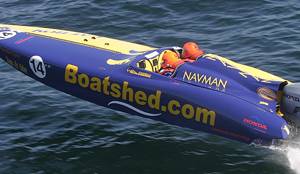 When Boatshed Hamble were approached to see if they could help out with the Boatshed.Com sponsored Honda 225hp powerboat, they jumped at the chance to lend a hand.

The guests enjoyed a high speed trip across the Solent to the edge of the race exclusion zone in both boats. The first race of the day was the V24 Bat Boats, followed by the 2litre class boats and the RIB's.

All guests also enjoyed a high speed trip in the Honda race boat, and came back with manic grins on their faces. They had caught the bug !

After lunch it was time for the real action and as the P1 class powerboats started up and moved out of the marina and into the River Medina the whole of Cowes reverberated to the sound of V12 Lamborghini engines and Turbo Charged Diesels.

The rolling start was a great spectacle with the boats all abreast and their rooster tails shooting out behind. The sound and the site was awesome. The race was won by the Sony boat, powered by twin diesels !

Hundreds of private boats turned out in the great weather to enjoy the action, and every body agreed it was great to see the class 1 boats racing at Cowes again after a long absence. 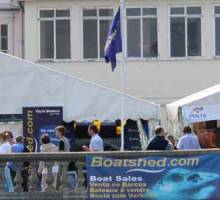 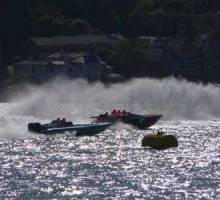 P1's and their Rooster Tails 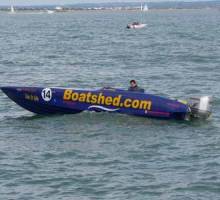 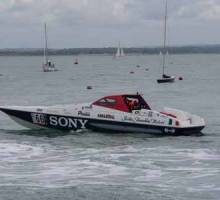 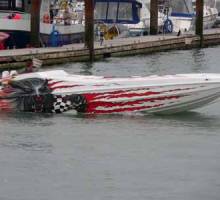 It's all in the Image!