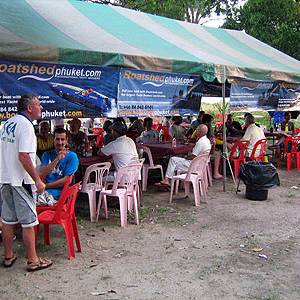 The third race of the Ao Chalong Yacht Club race series was held in Phuket Thailand, South East Asia's premiere yachting destination on Sunday the 5th April. Sponsored by www.boatshedphuket.com International yacht brokers, the race was sailed around Chalong Bay on the South coast of Phuket Island in the Andaman Sea.

A modified Course 4 and windward/leewards in light winds provided an opportunity for new kids on the block - boats, crew members and race officials - to get to know each other on Sunday. 14 boats set off from the start line in a sequence of two starts with the six-member FireFly class, offering the biggest turnout, getting over the line five minutes behind Racing, Cruising and Multihulls.

A precarious start with a round-up on the port tack and with the starboard tack trouble-free across the line saw Emerald Blue (with Alan Giles of Boatshed Phuket expertly managing the fore deck?) cross first and lead the fleet around the Baan Nit Channel Marker. The course followed an around-the-buoy by the mosque and island course with a long series of tacks up to and around Koh Lon and Koh Ae and a downwind sail back to the Baan Nit marker to complete the racing day. Although positioned well, the ketch lost her lead fairly early in the game and had to settle for second to Katsu who manged to overcome them despite a bad start.

Arnie Duckworth's home-designed and grown Happy Feet graced the ACYC scene for the first time, strutting her stuff and perfecting technique with a brief rise up on her foils. Good sailing tactics earned her the Multihulls top prize for the day. Her closest rival, Miss Saigon, kept her crew onboard with no man overboard scenarios this week.

Awatea with her all-star crew of boat brokers and a race offical crept up Koh Lon, out of a hole performing better than others struggling with the light winds on the beat up. Perhaps local knowledge as well as great tactics? Awatea came first in Cruising - beating all in her class of one.

Some in the know and some not? A shortened course due to the light winds meant some knew where the cutoff was and took their own times whereas others plowed on through looking for the pre-arranged finish line described at the briefing. Typhoon timed herself at four-and-a-half hours
- the last of the fleet to be recorded. For two of the Multihulls, Mamba Wamba and Charro, the lack of wind meant a 'gentlemanly retirement', and for the latter, a firing up of the engine ostensibly due to the fact that foresight in provisioning for the long day in the beer department had been poor. The race for beer was on! Happily, skipper Mark Horwood managed restraint and with a sigh of relief, enjoyed the last cold one on the dinghy ride into the yacht club. Fortunately, for the Motley Crew, beers aplenty were to be had onshore for the thirsty and needy troops!

With the show of the largest number of FireFlys in an ACYC race, sailing - and excitement - was keen. The new owner of Mamba, Robert van Paridon, joined regulars Moto Inzi, The Frog, Twin Sharks, last week's newcomer Pagatoon and this week's newcomer, Voodoo Child. Five members of the class finished within three minutes of each other - with Mamba trailing behind, learning the ropes. And the fate of the FireFly that went topsy-turvey in the first race? Owner Peter Dyer hasn't lost interest in the sport and was spotted sailing on Moto Inzi. Word has it that SEA Properties, with an overhaul at Latitude 8 Yachts and a new mast from Australia, will be back in the water in the near future!

The post race party held at the Yacht Clubs and sponsored by Boatshedphuket.com was a great sucsses with prizes of Gorgons Gin and Boatshed baseball caps. 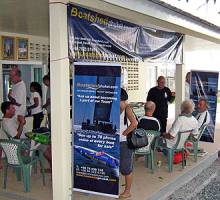 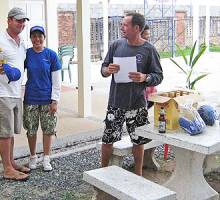 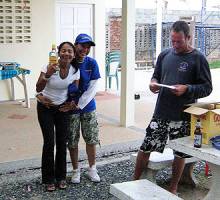 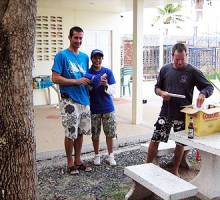