Boatshed sells boats, have you tried them yet?
Sunday, 26 August 2007

Boatshed sells boats, have you tried them yet? 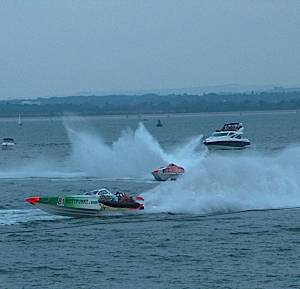 And this was amply proven during a recent excursion to Cowes to watch the P1 Powerboat racing in the company of the guys from Boatshed Hamble, Boatshed Cowes and Boatshed Poole. Time and time again I realised that the reason the Boatshed business works is because each and every one of the team members care passionately about the boats they are selling, the customers they have and the accuracy, attention to detail and all round service that they deliver. But I'm getting ahead of myself just slightly....

The Powerboat P1 championships are about noise, toys, boys and girls, speed, passion and exhilarating action. And that's just the after-party! The tour landed on the Isle of Wight (Cowes) on 24th August and the hotly contested P1 World Championships, split into two parts over the weekend, thrilled the massed ranks of petrol heads, day trippers, families and the Boatshed guys. Of course, Boatshed was here to work too. Michael and Peter Delbridge from Boatshed Hamble were quickly in the pit crew area, checking out the much vaunted VoomVoom.com of Vahid Ganjavian and Charlie Williams-Hawkes. Their interest in the boat was soon made clear as after the championships, VoomVoom.com will be for sale on their Performance section of the websitesee here

The newest Boatshed on the books is Boatshed Cowes, run by Frank Gelder (see story here) and he was making sure that his patch was running smoothly by attempting a quick getaway on a Segway. Not to be outdone, Peter Delbridge of Boatshed Hamble ensured bragging rights for a couple of nights in his local by bagging a photo opportunity with a bevy of P1 beauties. Ian Welsh, from Boatshed Poole slipped off to talk listings with 1st Boats, the main UK dealer for Fountain Powerboats, currently leading the P1 series. And along the way much merriment was had in the form of catching up with potential customers, helping with queries, lending tools where necessary and making sure that everyone had a really good time.

So back to the original point. It's not Boatshed that sells boats. It is the people within Boatshed that sell boats and makes it the success that it is. And the quote of the weekend has to be "I don't want excuses, I want results" (thanks Frank!) which I feel sums up the whole ethos of the team. 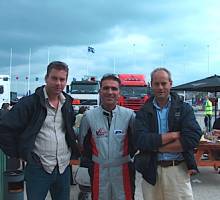 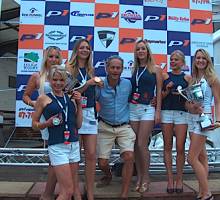 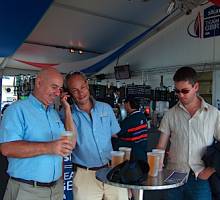 Listening to the race results 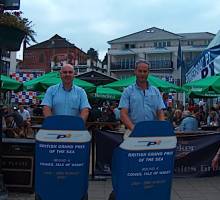 Why do they look like they are about to give a lecture? Frank (Boatshed Cowes), Peter (Boatshed Hamble) 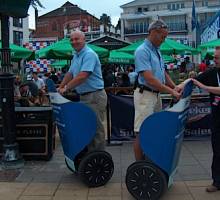 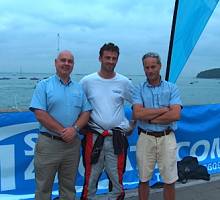