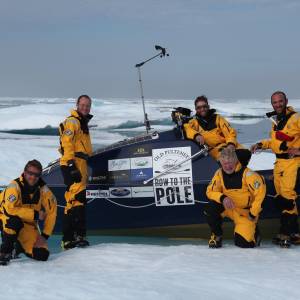 After achieving her place in exploration history by being the first ever craft to be rowed to the Magnetic North Pole, the Christchurch 'Ice Boat' lived up to all expectations last Summer and more.

That was the veridct of triumphant skipper Jock Wishart and his five-man crew, a fitting testament to the skills of the boats builders - ROSSITER YACHTS, Christchurch, Dorset.

The Old Pulteney Whisky, sponsored Row to the Pole was not completed in late August without testing boat and men close to the limit. Their 450 mile route from Resolute Bay, in Canada, meant they would have to conquer some of the harshest conditions on the planet, not to mention encounters with Polar Bears. The four week voyage took them through water which were open for just a few weeks of the year due to climate change increasing the seasonal ice melt in the Arctic.

Skipper Jock, an expereienced adventurer, reported how the final leg of their journey started at night when a possible route through the disintegrating ice began to open up. "We'd been pinned down for days by ice and heavy winds but the conditions changed and we were able to pick our way through. The last three miles proved to the hardest of all when we had to take the boat out of the water and then haul it over ice".
"We were all absolutely exhausted, but elated. No ones ever even tried to do this before. In fact most people did not think it was possible, but we've done it".

The special design of the Ice Boat proved crucial to the expeditions success. The 9.2 metre craft was the first of her type with a 'cathedral' hull, complete sledge runners beneath and attachment points for harnesses so that she could, indeed, be dragged over obstructing ice floes.

A documentary of their progress, is to be shown by BBC Scotland this Winter.

Thinking of Selling Your Boat?
Boatshed Poole can help you prepare your boat for sale and can have it on the market within days available to Boatshed’s own database of over 400,000 registered users. And now the photographs are 4 times the size and as always we sell boats on a ‘No Sale, No Fee’ basis.