First Female Coxless 4s Attempt to ROW across the Pacific 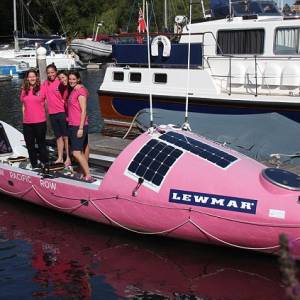 Female Coxless 4s attempt to ROW across the Pacific,sleeping in two-hour shifts for SIX MONTHS... in a pink boat called Doris. This was built at Rossiters Boatyard, in Christchurch Dorset.

The women are attempting to be the first female 4's team to row unsupported across the Pacific Ocean from America to Australia.

Throughout the 8,446-mile journey, the women will have to spend two hours on the oars and two hours off for six months solid.

The coxlesscrew, who are aiming to raise over a quarter of a million pounds for two charities: Walking With the Wounded and Breast Cancer Care survivors, have just over two weeks to go before they embark upon their voyage.

To read more on this article, please visit