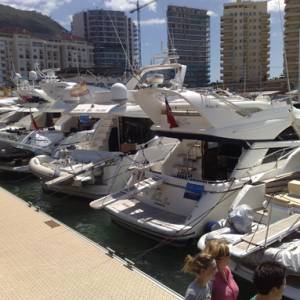 The first ever Gibraltar International Boat Show was held between Thursday 9th and Sunday 12th April 2009 in the Ocean Village marina in Gibraltar.
Boatshed Gibraltar, International Yacht Brokers wrote a timely article for the monthly glossy Gibraltar Magazine to appear just before the start of the event and provided silver foil car windscreen sunshades for boat show clients who parked their cars in the heat during the show at the local marinas. The powerful sun has started to make itself felt down here and they were much appreciated.

Boatshed Gibraltar were proud to have one of their used boats on the floating display area at the show.

John & Lynda from Boatshed Gibraltar said, The Jeanneau Sun Odyssey 35 quickly became a favourite of the show with yachtsmen who quickly realised that she had more accumulated miles under her keel than the rest of the boat show fleet put together. She stood out like a beautiful girl in a crowd of brutish twin engine power boats. By the time the public had walked past the phalanxes of moored power machines they could hardly believe that a lovely, comfortable 4/6 berth sailing cruising can be bought for around £50,000. The Jeanneau Sun Odyssey 35 also provided Boatshed Gibraltar with a branded floating office, where customers could book appointments to come onboard to view her and to look at the other 3000 boats for sale with Boatshed Gibraltar. The show provided some good serious inquiries and new listings which were a direct result of John being at Boat Show.

The show provided a great networking opportunity, including press, newspapers and magazines including "What Boat", who are looking to liaise with Boatshed Gibraltar for articles re the brokerage market in Gibraltar area in the near future.

During the show the final coup was the completion of their latest sale, a Beneteau 331. All paperwork was delivered on their floating office at the show. John says "Now that I’ve proved to Lynda how useful a floating office can be I may be one step closer to acquiring that yacht of my very own! 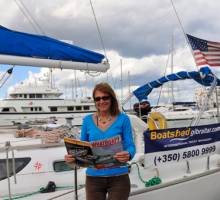 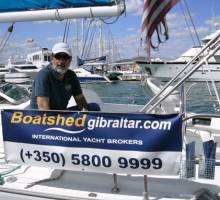 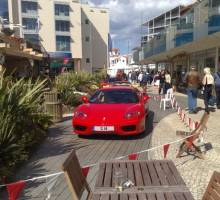