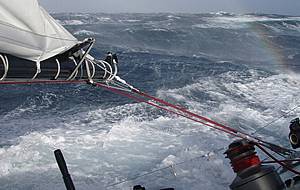 As the first boats come out of the blocks again to re join the Velux 5 Oceans after their 48 hour in port penalty for outside assistance, there are 2 boats out in front with a good headstart having battled their way through the storm that caused so much damage.

Stamm is out in front, leading his defence of the race in no doubt as of yet, followed very closely by our own Koji on 'Spirit of Yukoh'. Koji has also been fighting his seasickness over the last 48 hours.
With reports coming in from Koji that he's now over the seasickness all his energy and effort is on closing the gap between him and Stamm and keeping a watchfull eye on the rear.

In true Boatshed fashion first's Koji has sent back the first picture to race control. Fortunately for Koji and his camera we are not expecting to see the other 64 standard Boatshed photos! :)

This leg certainly looks to be a corker with the line up and positions of the boats who knows what is going to happen between now and Fremantle, one things for sure its going to be interesting to watch.

Relatively light winds yesterday allowed Japanese solo sailor, Kojiro Shiraishi, to make running repairs on Open 60, Spirit of Yukoh. Before entering the solo sailing circuit, Koji graduated with qualifications in commercial fishing and a practical, methodical approach to keeping his yacht in optimum racing condition is one of his strongest attributes. He has sent the following messages and images to the race organisation.

In the 05:30 UTC poll this morning, Spirit of Yukoh is 300 miles due west of the Canary Islands, racing in second position, 225 miles behind VELUX 5 OCEANS leader, Bernard Stamm on Cheminées Poujoulat:

"I've had to overcome many problems this morning . Firstly the starboard winch - the mainsheet winch - felt much stiffer this morning. On closer examination one of the bolts within the winch had come loose and jammed it. That bolt was pinned against the mount and wouldn't budge. The mount itself was being worn away. I managed to pull the bolt out as it was bent, but now the 8-bolt winch had been reduced to a 7-bolt winch. I hope it holds out!"

Concerned that this problem may affect the boat's other winches, Koji made a thourough inspection: "I checked the other winches, and I found the portside primary winch to also have the same problem. One of the bolts had become loose and was wearing away its mount. Again, I took out the loose bolt to solve the problem. This issue is affecting the two most important winches. In all the other winches many of the bolts had also come loose but thankfully none of the others had started to wear away at their mounts. I went on to tighten all the bolts. Thinking about it, I'm glad that we are not in the Southern Ocean right now. I'm pleased to have managed to fix the problems during these calm conditions."

Koji spent the remainder of the day on maintainance: "The rope cover of the gennaker had ripped. I fixed this using thread and needle as an emergency repair. I also attempted to recharge the yacht's batteries. A 4 to 5 hour recharge: the noise and heat within the cabin is extreme."

With the jobs completed, Koji signed-off in typical style: "I'm counting on you, Spirit of Yukoh!!"

Keep it up Koji! 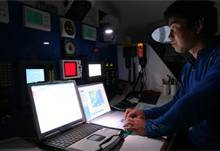