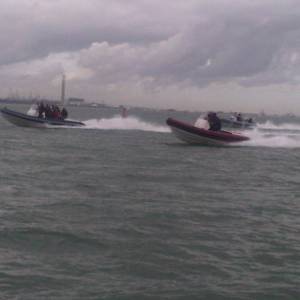 Sometimes, I come to the conclusion you just get too many emails. Anyhow, whilst poring through Friday’s delivery of the odd two or three hundred emails in my inbox, I noticed one titled Rib Raid; nothing to do with technical redundancy on servers. When I opened it, I found it was an invitation to go and join the guys at Boatshed, Hamble for a brief soiree around the Solent.

The instructions for the Rib Raid were very clear that it was not a race. Therefore, upon discussions, my skills on navigation were discussed and called for, for the event. So, on Saturday morning with still a fair amount of rain and wind in the air, I turned up as instructed at the Royal Southern Yacht Club in Hamble and met Peter from Boatshed, Hamble in the Boatshed, Hamble rib.

The event itself – note: I refrain from using the word race at every opportunity – involved travelling from numerous locations within the Solent whereby you were instructed to travel from one buoy around another buoy and then around another buoy back to a finish location where a committee boat was waiting to give you a sealed envelope. Inside the sealed envelope was a playing card, of all things, and another set of instructions on which way to travel. I hasten to add, again, this was not a race; however, Peter’s skills as a level 2 powerboat instructor became very useful as we passed many of the Solent buoys within a distance of a few feet at a closing speed of between 35 and 40 knots.

Obviously, with this not being a race, it lacked very little of the normal elements of this type of event. It certainly didn’t lack speed or inability to navigate due to bouncing around in the cockpit of the boat. After five such legs, and on most cases coming in, in a position of either third or fourth, we returned back to the King and Queen Pub in Hamble for the prize giving. The prizes were awarded on the quality of the cards in the envelopes that you had received. Not knowing much about poker, I was, initially, excited to see that we had a pair of tens. However, as more teams returned to the pub it became evident that hands that included two pairs meant we were pushed further down the rankings. However, we eventually obtained fourth place in the event. So our cards couldn’t have been too bad and, again, this wasn’t a race so it had nothing to do with Peter’s exceptionally fast driving.

Other teams within the event included the RYA and a number of local charter companies and regional celebrities, all of which, of course, weren’t racing. A great time was had by all and a great deal of fun. My thanks to Peter and the team from Boatshed, Hamble and we look forward to joining you again next year for this very successful Rib Raid and a large amount of money was raised for the Hamble Rescue. 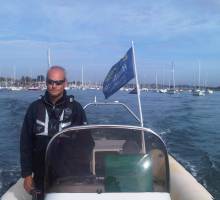 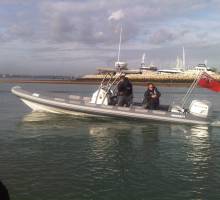 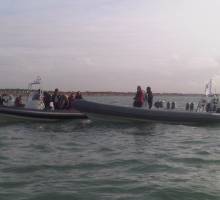 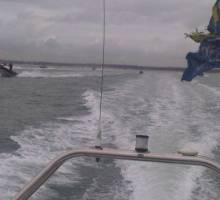 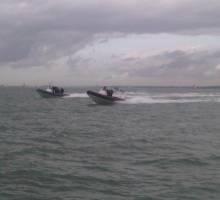