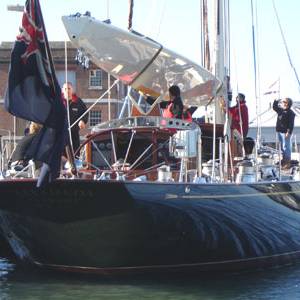 Looking up from my computer at HQ I spotted a very large fractional rig, she's arrived I shouted, lets go down to the marina. She arrived on a very crisp, cold, & frosty with clear blue skies.

Velsheda made her way to Royal Clarence Marina, Gosport, to have her mast craned out. Two cranes were already on the dockside standing by to remove her 180 foot rig. Her spars are constructed from hand laid impregnated carbon fibre in an epoxy resin matrix and her boom is so large looks like a rowing boat when lifted off. She arrived early at 09.45 approx on a rising tide and disturbed some silt with her 15 foot draft on her approach to the dock side. People on the marina were taking lots of photos, as its not every day you get to see one of the most elegant yachts in the world.
Her attention to detail is superb, she actually has low guard rails for deliveries which neatly dissapear for classic regattas.
Look closely at our pictures we took of her today from the Boatshed launch.
Her hull was so well polished, no evidence of any salt water spray from deliveries. Her crew were wearing Velsheda T-shirts over the top of their thermals, (if her crew are reading this I would love a T-shirt in medium please!) The whole job went very quickly & smoothly and she has now headed back to Southampton waters were she is heading up the River Itchen for a minor re-fit at Shamrock Quay. This is the reason for unstepping her huge mast.

A bit of history
She was the 6th J to be built and the second to come from the drawing board of Chalres Nicholson, built in 1933 and in steel. She was once owned by the chairman of Woolworths and named after his 3 daughters, Velma, Sheila & Daphne. When she was launched she was the most technologically advanced yacht on the water. In 1996 she was given a full custom refit, using modern technology & materials, enhancing her performance further.
She is probably the most famous and certainly the most elegant classic in the world.
For more info see Velsheda History

Photos and report by Mandy Chapman of Boatshed.com. 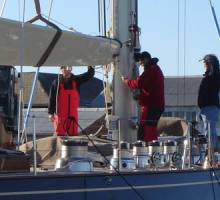 Her crew handle the massive boom. 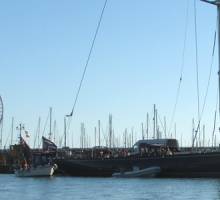 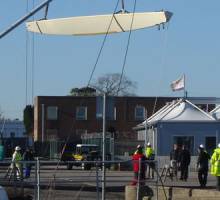 Boom lifted, note the Boatshed landrover, in the background, used by the shore team. 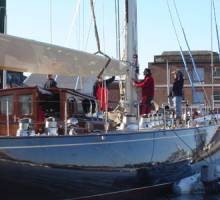 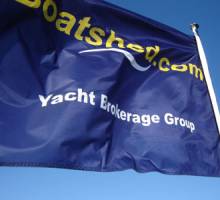 Stress balls into the cockpit and flags got the message across. 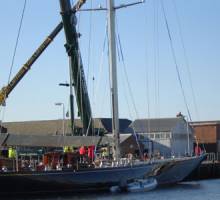 Big cranes were the order of the day. 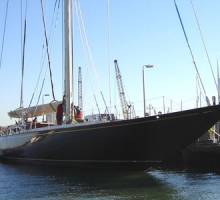 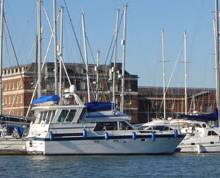