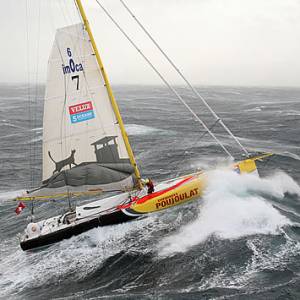 The Velux 5 Oceans has begun in spectacular form with nature laying down the law from the outset. Mike Golding on Ecover reported 70 knots!

Below is extracted from the Velux 5 Oceans site and certainly made me feel a bit warmer on land with all the comforts like stability!

Godspeed and goodluck to all, and just a little more to Koji on 'Spirit of Yukoh'

While there is a lull in the storm for some competitors in the VELUX 5 OCEANS, others are still feeling the full brunt of Mother Nature as they are pounded by giant waves and lashed by gale force winds in the Bay of Biscay. Overnight
two skippers, Mike Golding and Spain's Unai Basurko, have followed Alex Thomson's lead and are heading for port to make repairs to their damaged boats. Meanwhile on lookers are comparing the conditions the boats experienced yesterday to those encountered in the 1998 Sydney-Hobart race where six live were lost.

While Alex Thomson arrived back in Gijon last night to replace Hugo Boss' decimated Solent jib, the top of his starboard runner winch and a variety of lesser problem, so Mike Golding last night turned the bow of Ecover towards La Coruna after Ecover suffered damage to three of the mainsail batten boxes which retain the forward end of the mainsail battens and connect them to the mainsail track which runs up the mast.

In 50-60 knot winds Ecover's mainsail was almost completely down when the incident occurred. The damage occurred when the wind whipped the exposed top section of the heavily reefed mainsail across the boat with such force that it snapped three of the steel pins which attach the batten boxes to the mast-track slider. Ecover shore team member Mike Clay reported, "The repair itself should not take that long. We have the spares and will put more on board but there are some small repairs to make to the mainsail which should not require it coming off the boat."

Further north than Hugo Boss, Ecover has further to sail to make port, but Golding hopes to reach La Coruna late this afternoon. He too will then have to spend a minimum of two days in port as a penalty for accepting 'outside assistance' from his shore team.

In the strong conditions yesterday Spain's Unai Basurko's Pakea yesterday sustained damaged to her headsail and mainsail and also has some unconfirmed issues with the stability of her mast. Bilbao's hero was heading back to Puerto Deportivo (Gexto), the start point of the VELUX 5 OCEANS, but may attempt to make port somewhere closer along the coast. Unlike the Vendee Globe competitors where competitors are allowed to restart, in the VELUX 5 OCEANS they must take a two day penalty regardless of where they put in.

Still surviving the conditions the Bay of Biscay is throwing at them, are round the world veteran Sir Robin Knox-Johnson on SAGA Insurance and Japan's Kojiro Shiraishi on Spirit of Yukoh. Sir Robin has been hove to all night (ie going nowhere, by only having a deeply reefed mainsail up and keeping boat's bow into the wind). Kojiro has been making slow headway in a northwesterly direction.

The hero of the hour must be Bernard Stamm, who after sustaining some sail damage to his Cheminees Poujoulat yesterday will this morning round Cape Finisterre in first place. Fortunately for Stamm while conditions remain treacherous for Sir Robin Knox-Johnston and Kojiro Shiraishi, they have abated where he is, although a large sea way is still running and the wind has backed to the south - exactly the direction in which he wishes to sail.

Commenting on the weather patterns sweeping into the region, Adams added, "We always knew that this would be a nasty corner to negotiate. We were expecting strong winds of 40 knots, but none of the weather models or advisors predicted 60 knots, and it looks as if this big storm might be around for at least another 24 hours. With such conditions, you can expect waves of 12-14 metres. I spoke to each of the teams and their weather advisors before they left Bilbao and none of the skippers had concerns about leaving on Sunday."

To read more about the weather the boats have been experiencing see round the world sailor and meteorologist Chris Tibbs' assessment on the www.velux5oceans.com Features section (under news).