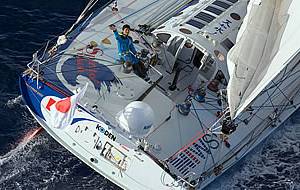 Huge congratulations go out to Koji on the Open 60 'Spirit of Yukoh' who has finished 2nd in the Velux 5 Oceans first leg to Fremantle.

'Spirit of Yukoh' sailed across the Fremantle finish line at 22:00 local time (13:00 UTC) on 7/12/06 giving the team a well fought for podium place behind Bernard Stamm and Cheminées Poujoulat.

The ever attentive and determined skipper has impressed all in this first leg of Open 60 racing, especially us at Boatshed.com who are thourghly pleased with the opportunity to be involved with sponsoring the team.

Boatshed.com became interested in supporting Koji after initial dealings with him and his team during the brokering of 'Spirit of Yukoh' by the specialist Open 60 tailored brokerage partnership of Boatshed Performance with Owen & Clarke design office.

The Open 60 was formerly Dominique Wavre's successful 'Temenos' and looks to be continuing with her past form and strength (no stop offs for repair along the way!) enticing complements from the master himself Bernard Stamm.

There are still 3 more boats out there fighting for the final podium place with the battle of words and boatspeed between Robin Knox Johnston and Graham Dalton proving that it's not over till it's over! 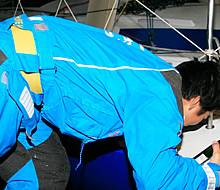 An emotional moment for both Koji & 'SOY' copyright velux5oceans 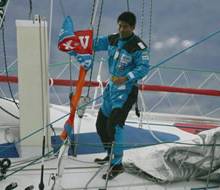 Koji on the move, copyright velux5oceans