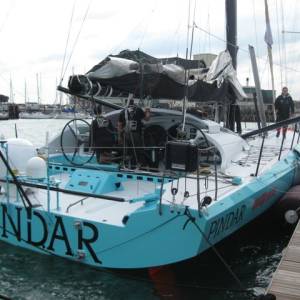 If Open 60 or Vendee Globe does not mean much ? Watch this first The most inspiring 5 minutes you'll have this week!!!

After a hard 10 days on the stand of the PSP Southampton Boatshow what do we do at Boatshed to relax?

Slowing down is not an option for Boatshed.com so cue Pindar Ocean racing Team to help us out.
The Boatshed HQ Team were invited as special guests to help Brian Thomson and the crew of the new Pindar IMOCA Open 60 run her through her paces and continue to prep this Ocean Racing machine for the Vendee Globe Race, which starts on the 9th November.
The Vendée-Globe Challenge is known as "the Everest of the sea". The race is open to 60ft monohulls and is Non-stop, singlehanded, around the world. The finishers will return to a heroes' welcome at Les Sables d'Olonne in France.

Neil, Mandy and Josh from Boatshed.com were very fortunate to be invited personally by Andrew Pindar to get first hand experience of this fantastic boat.

It takes 4 people on the grinding winches to get the mainsail up and we were all puffing as we got the sail up to second reef, Neil and Josh took the helm down the Solent “I now know what it feels like driving a Formula 1 car, so much power and so responsive” said Neil.

With a mild Easterly breeze we sped off down the Solent at 11 knots and within an hour we were approaching Yarmouth on the Isle of Wight.

Then it was back up wind towards Portsmouth and with a couple of reefs tucked in the boat sped back home at 14 knots upwind! The wind freshened as we approached Portsmouth and Mandy took the helm as we got some 20 knot gusts across the deck. “As much fun as helming Playstation” says Mandy with a huge grin on her face…. Some people get all the luck!

Its a bit too late to enter the race but if you would like to sail fast Boatshed Performance.com has succesfully brokered boats for some of the skippers and currently has a number of IMOCA Open 60's for sale as well as more high performance vessels.

A huge thank you to the Pindar Ocean Racing Team, superb to sail with such a professional and down to earth bunch of people. Boatshed.com will be on the start line of the Vendee Globe to cheer Brian as he sets sail in November.

Thanks again to all the crew and Andrew Pindar for letting the Boatshed Team come along. 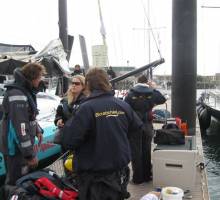 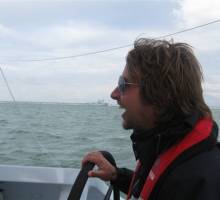 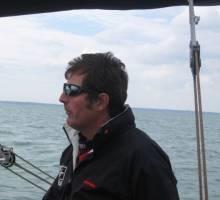 Skipper Brian Thompson looks as cool as ever 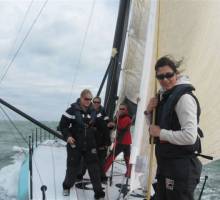 Mandy helps out on the Foredeck 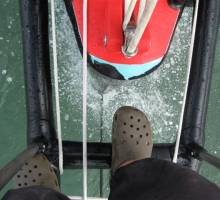 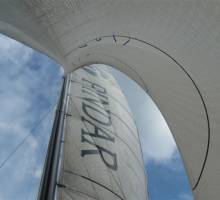